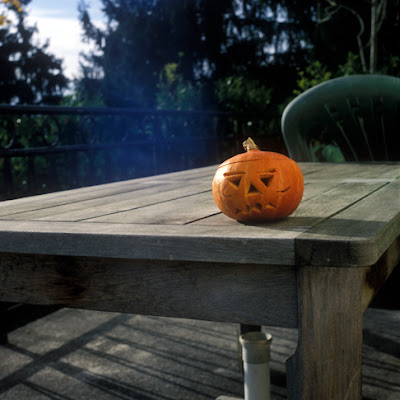 Email ThisBlogThis!Share to TwitterShare to FacebookShare to Pinterest
Labels: Hallowen, My work, photography

A little F&F update. This month sees the Front and Follow artist Andy Nice on tour across Europe with one of my favourite bands the Tindersticks. For this tour F&F have re issued his excellent debut album "The Secrets of Me" in a new format (minus the patch). Also this month also sees the release of 'Bones' a beautiful colaboration between Mr Nice and Isanj Dui for the year long adventure that is Arctic Circle's "Explorers Club". I recommend checking them both out. 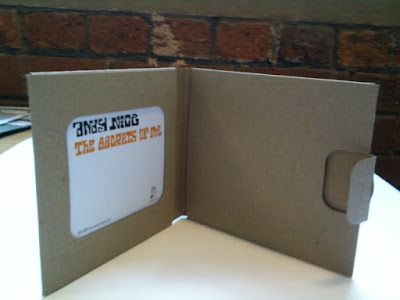 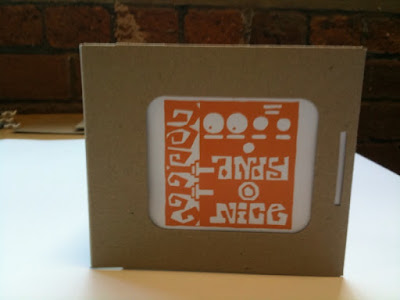 After last weeks knitted item I have another posting from the world of wool. I came across the work of Nicole Gastonguay who is a New York based artist/illustrator who designs book covers to keep the wolves from the door! I first saw her work while flicking through Tangible and recently came across it this week while searching for 'TV Dinner' on the net and the resulting image of a not so happy piece of meatloaf made me smile, as did all here other creations when I visited her site. There was an old loved feel to the way that her creations had been photographed as well, as if they were demosration illustrations from an old crochet pattern book.  I could think of worse ways of ending the week than clicking over to her site and checking her work out! I just wonder what her book covers are like!

On my way to work today I walked past a house that was having a treatment carried out to its walls, the result of which was small patches of powder at the base of the wall. I just had to take my camera out and take a few shots. It felt like I was looking through a telescope and seeing the Sea of Tranquility. 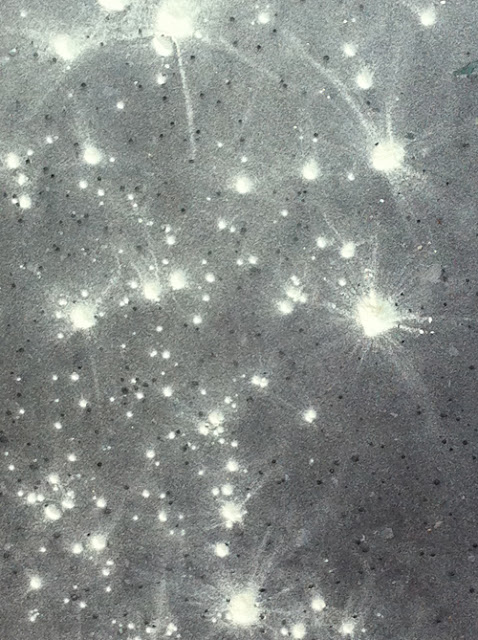 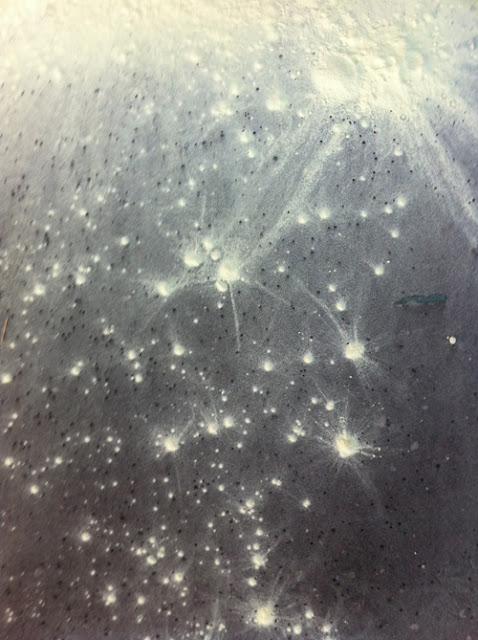 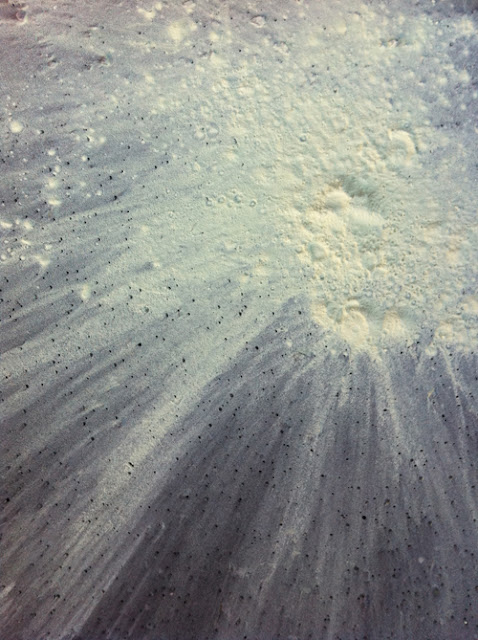 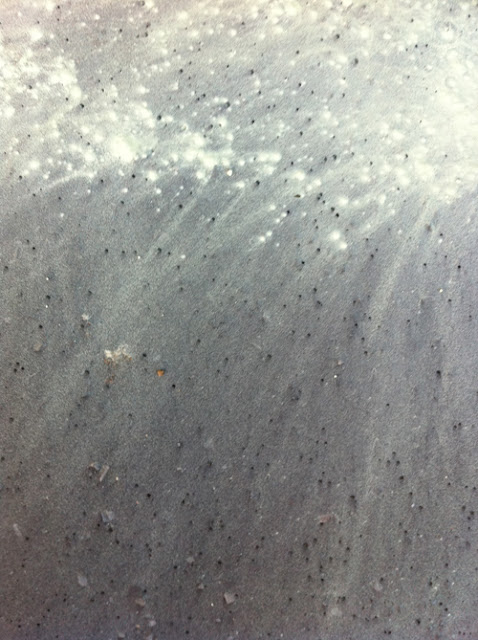 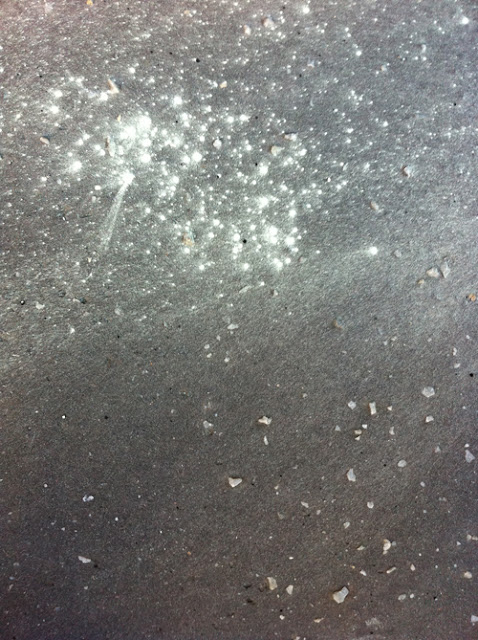 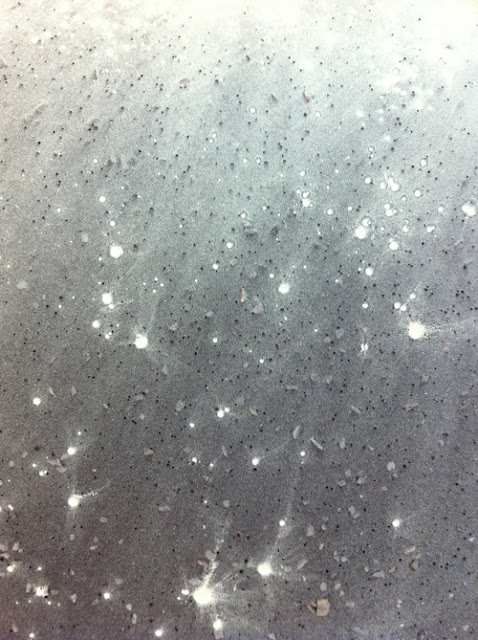 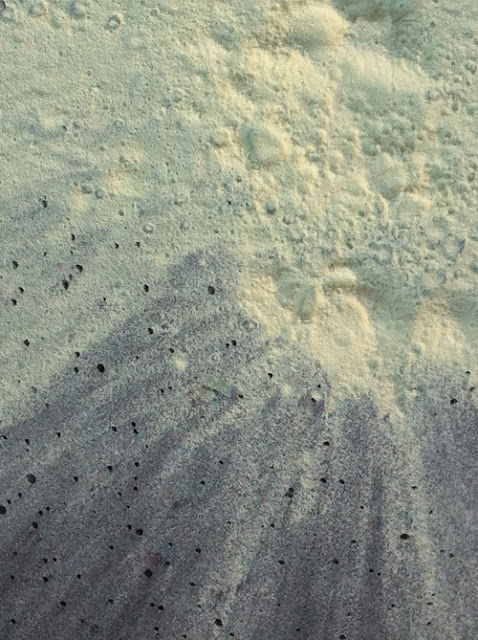 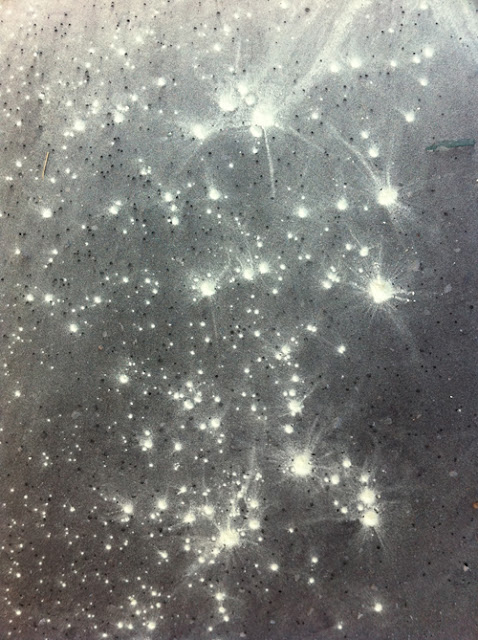 Email ThisBlogThis!Share to TwitterShare to FacebookShare to Pinterest
Labels: makes me smile, photography

Yes it's time for the annual rant against modern art that has become known as the Turner prize. This little video taster from The Guardian isn't the same as popping down to Tate Britain and seeing it for your self but for us non London based art lovers it will have to do until we can experience it ourselves!
No comments:

Email ThisBlogThis!Share to TwitterShare to FacebookShare to Pinterest
Labels: Friday photo, My work

I'm probably stating the obvious here but there is no one like Tom Waits. His on stage persona of a down at heel barfly, spilling stories and singing sorrows through a fog of cigarette smoke and sour beer to anyone who will listen is one of the best ever created. Continuing in that 'old style' vein is his next release which will be a 78rpm record! Now apart from wax cylinders that is about as retro as you can get and if your worrying about how to listen to it Old Tom has thought of that too, 100 copies of the record will be accompanied by a 78rpm turn table. That beats the likes of U2, Madonna etc releasing their albums on an ipod.

As it says on Tom's site;

The two tracks will be packaged in a special limited edition 78 rpm format record, each signed and numbered by Preservation Hall Creative Director Ben Jaffe. The first one hundred records will be accompanied by a custom-made Preservation Hall 78rpm record player as part of a Deluxe Donation package ($200). The remaining four hundred and four will be available as a standalone record for the Basic Donation package ($50).

Both will be available for in-person purchase at Preservation Hall in New Orleans on November 19, 2010 at 10:00am Central and available for purchase online November 20th here.

So if your near New Orleans on the 20 November pick me up a copy!
No comments:

Knitting is something I always wished that I could do. I remember being at secondary school and trying to knit squares that could then be stitched together to make a quilt to keep old ladies knees warm down at the local old folks home. After about an hour of frustration I completed my first row (with a few dropped stitches) but that was as far as I could get, the second row remained elusive and that signaled the end of my adventures in knitting! I wished that I had persevered and could incorporate it into my design.

I recently came across the work of American artist Robyn Love and that desire was rekindled. Robyn has used her knitting and crochet skills to make simple but striking statements, her recent typographic work called "Unconditional Yes' is bright, passionate and reaffirming and her 2008 project the knitted mile made me wince at the number of man hours needed to complete a project like that, it made me think of Carol Hummel's knitted "Tree Cosy" which when I first saw pictures of it I thought that it was a clever job in photoshop but no it was for real and made the tree look beautiful. The installation lasted for 3 years and she has gone on to create similar works across America and in India and has even made underpants for trees as well! 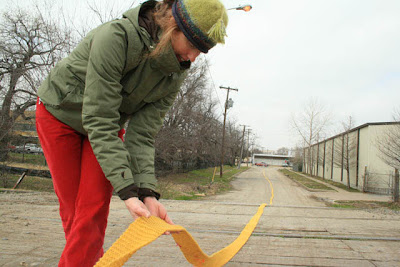 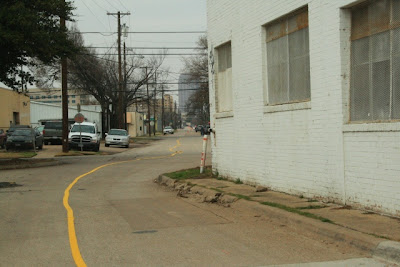 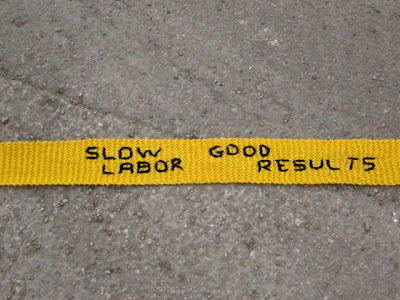 The Sum and the Difference 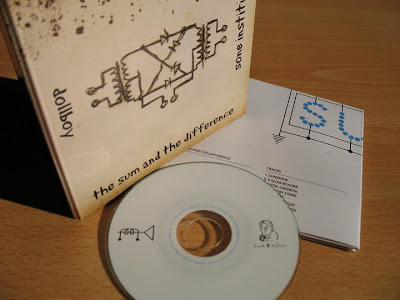 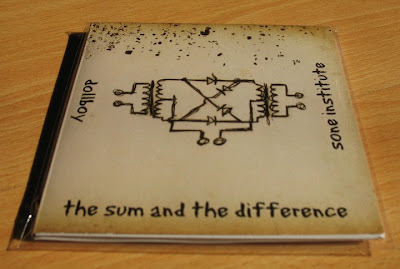 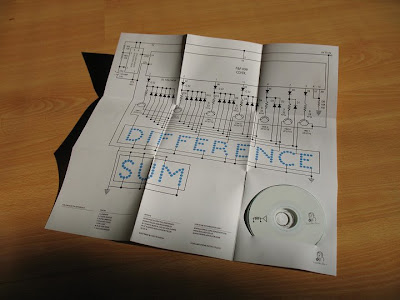 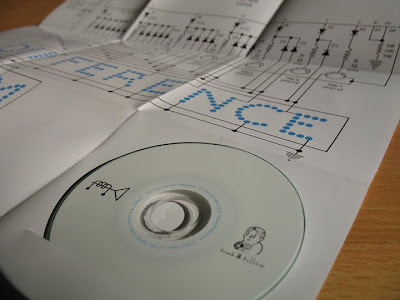 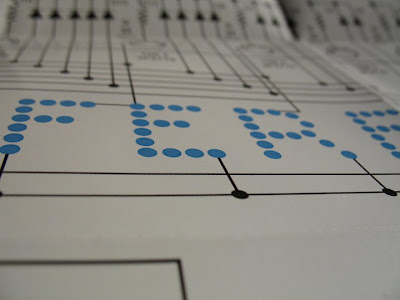 A quick look at the latest release that I have completed for Manchester label Front & Follow. It is described by F&F as a home spun collection of hazy acoustic tunes and electronic interventions from Sone Institute and Dollboy.

The title of the album is "The Sum and the Difference" which refers to a circuit that has two inputs and one output (I have really over simplified that so please forgive me all you circuitry buffs out there!) The cover was a sketch supplied by the artist and from that the idea of using circuit diagrams arose.

I carried out quite a bit of visual research on circuit diagrams, components and the symbols that are used to represent them. This lead me to looking for a way of incorporating some of these elements in to the design. It was then that I thought about LED displays and how they work.  I created a circut based on one used in LED display boards and then created a typeface based on circles to emulate the LED's. Then used this to spell out the two main words in the albums title. I really enjoyed creating the letters for this and if time permits I may develop this into a whole character set.

If you want to give it a listen it's here on sound cloud and it will be full released as a 3" CD and digital download on the 25 October. If your interested and you pop over to the F&F shop where it is available to buy.
No comments: 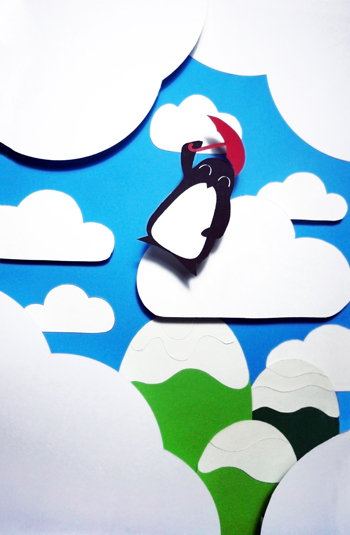 I've just completed the next paper cut illustration for Arctic Circle used to promote the next series of AC concerts which include Emily Barker and Peter Broderick, both well worth a look and a listen.
No comments: 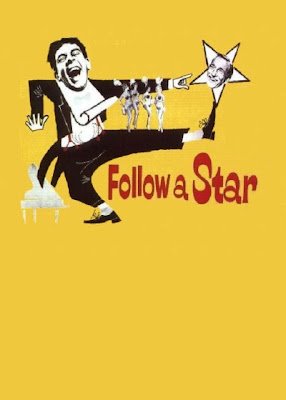 I just heard the sad news that a childhood hero of mine Norman Wisdom died today. I have fond memories of growing up with Norman's films. I remember when  ever I fell sick and missed school, my mother would make a bed for me on the sofa in the sitting room and turn on the TV.  Propped up on feather pillows and tucked in tight to wool blankets I would lie down and watch the 'Monday Matinee' (if I was lucky enough to be off on a Monday) on ITV. Sometimes the matinee would be John Mills fighting Germans or Stanley Holloway in an Ealing comedy and sometimes it was little Norman sticking it to the man and getting the girl as Pitkin.

I still take the same childhood comfort when I stumble across one of his films on telly now. I am filled with an innocent warmth and am transported back to that sofa, tucked in by my mum with the smell of buttered toast filling my senses and Norman clowning around on the telly.

Thank you Norman for making me smile and don't forget the 'comedy trip' as you pass through the Pearly Gates.
No comments:

It's not everyday you get a picture of Charlie Sheen in your inbox, (at least not my inbox). So when this arrived from OSV Records it made me giggle. This is the result of a little project that I helped out on and makes an interesting addition to my record collection.
No comments:

Email ThisBlogThis!Share to TwitterShare to FacebookShare to Pinterest
Labels: makes me smile, Music

A little weepie that I came across while doing some image research this week. If you would like to see more stories like this just pop across to storycorps.com which is a project that records people talking about their lives and puts some of their stories to animation.
No comments:

Email ThisBlogThis!Share to TwitterShare to FacebookShare to Pinterest
Labels: animation