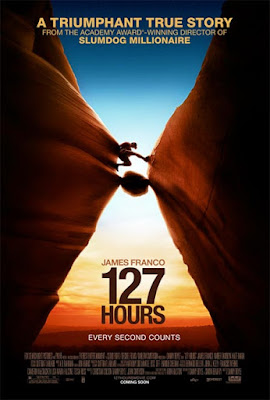 OK first up is 127 Hours. Directed by Danny Boyle

Synopsis:
A mountain climber becomes trapped under a boulder while canyoneering alone near Moab, Utah and resorts to desperate measures in order to survive.

Design by: XL
This is from the same design studio who created the fantastic poster for Sideways.

The main theme in this film is time and that is captured both beautifully and subtly by this poster; the use of negative space between the two sides of the canyon to suggest an hourglass and the idea of 'time running out' is masterfully done. It rewards the viewer an makes them want to look again which is always a good thing. The feeling of urgency is another idea conveyed through the colour graduation of the sky; blue sky's slowly turning to blood red.

The general layout follows the standard 'movie poster template' but I must admire the tenacity of the designers to fight for 'a concept' over a photo of the main star, especially when he is James Franco! The fonts used are Helvetica and Helvetica Condensed which are clean and clear and do not detract from the visual play of the image and communicate all the salient information.

As is common now there are multiple posters to advertise a film and 127 Hours is no exception. The other variations follow a similar layout to the main poster but fall short of giving you an idea of what the movies about instead opting to show you the star.  One of the alternatives is a halfway house that plays on the idea of one's life flashing before their eyes, but that is a complicate concept to squeeze into a film never mind a poster! 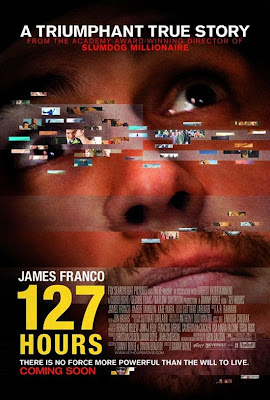 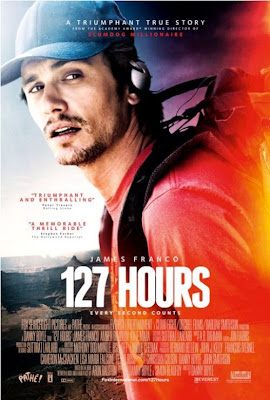